Posted on June 28, 2014 by thelovelywibblywobblyoldlady

Reposted from the Guardian

This protest is trending on twitter, but surprise, surprise no mention of it on BBC!

There are approximately 200 police for 60 protesters! (love the strategic placement of the raw compost bin :-)) 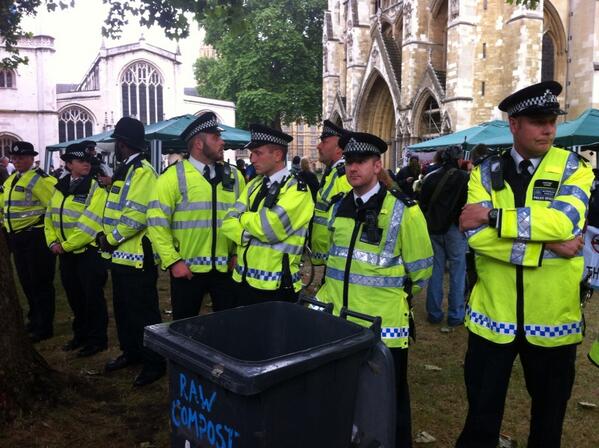 The group has urged the church not to forcibly remove them from its grounds. Photograph: Stefan Rousseau/PA

Demonstrators have set up a camp in the grounds of Westminster Abbey to protest against cuts to financial support for disabled people.

Members of disabled people against the cuts (Dpac) pitched tents and said they intended to occupy the green outside the doors of one of Westminster’s most recognisable landmarks until 22 July. The protest is reminiscent of the occupation that sprang up at St Paul’s Cathedral in 2011.

The Dean of Westminster is expected to negotiate with the protesters on Saturday evening, after they claimed he initially refused their request for permission to stay.

The group also sent a letter to the Archbishop of Canterbury, the Most Rev Justin Welby, urging the church not to forcibly remove them from its grounds. Around 100 protesters began the demonstration, but a heavy police presence meant their number dwindled to around 50 people.

The Metropolitan police said that one person was arrested on suspicion of assaulting a police officer as protesters sought to establish a camp and officers resolved to stop them. Police stood on top of tents in a bid to prevent the demonstrators from pitching them. Some protesters in wheelchairs locked themselves to fences at the site.

They were supported by Labour backbench MP John McDonnell, who said that the government’s cuts to welfare were making people “desperate”.

“We have had debate after debate in parliament. We have had 100,000 people sign a petition for another and the government refused,” he said.

“So, people have got no other option but to take direct action to expose what is going on. That is what is happening here today. It is a peaceful demonstration and I wholeheartedly support it because people are desperate.”

McDonnell said that abolishing the Independent Living Fund (ILF) would mean that many disabled people, who he said have “already suffered badly as a result of the cuts”, would end up “trapped in their homes”.

The ILF was set up to fund measures to allow disabled people to live at home, rather than in care. But the government plans to scrap it, meaning that many would no longer be able to afford the support they need.

In their letter the protesters wrote: “We feel we have no choice but to take direct action in the shadow of parliament because the situation in this country under the austerity programme has become impossible for many disabled people, their carers and non-disabled people to survive.”

ILF recipient Kevin Caulfield said: “Changes brought in by this government herald the end of independent living for disabled people and the return to a segregated society where disabled people are warehoused away.

“Ironically, at a time when the public is up in arms about abuse in care homes, current government policy will return disabled people to exactly those places where we are most at risk of abuse.

“Disabled people fought hard over many years to fight our way out of the institutions to live and participate alongside our families and friends. We won’t go back. We will fight back.”

A spokesman for Westminster Abbey did not respond to a request for comment.