GOVERNMENT AUSTERITY CUTS ARE BEING CARRIED OUT WITHOUT THOUGHT OR CARE. SO SAY TOP CIVIL SERVANTS WITH NO AXE TO GRIND. WHAT ARE YOU GOING TO DO ABOUT IT IN THIS GENERAL ELECTION YEAR?

Posted on January 2, 2015 by thelovelywibblywobblyoldlady

Reposted from Ripped off Britons.com 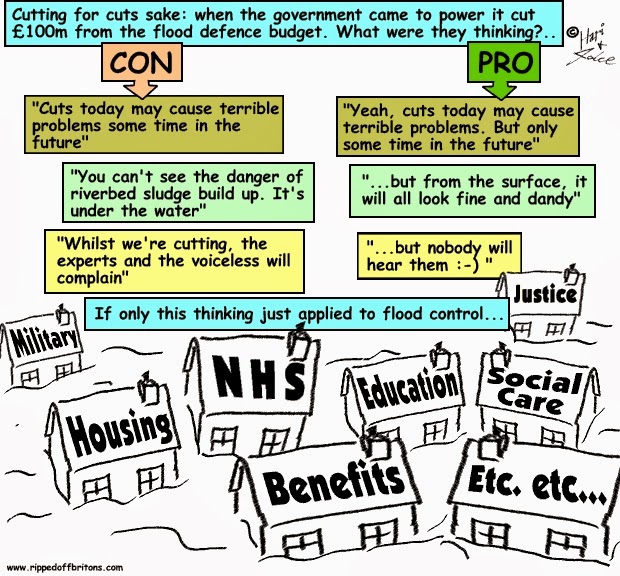 The Welfare State was hard won by generations of Britons before us. It is as much an inherited right as is the unearned income received by some from their inherited property and financial assets.

Doubtless the Welfare State can be reformed and improved. However, evidence from independent top civil servants shows government reforms of the Welfare State are not driven by well considered improvements, but by a reckless drive to cut the cost. The Permanent Secretary of the Ministry of Justice (MoJ), speaking about MoJ cuts, admitted “the most critical piece of evidence that was relevant to the decision that was made was the size of the spend.” We will come back to this later.

In the years following the two World Wars the strength of ordinary Britons at the warfront and on the homefront was clearly understood and appreciated. Those years saw pieces of legislation that gave birth to the Welfare State:
The following information on legislation is from the BBC Bytesize site:

Family Allowances Act (1945) – 5 shillings a week for each child after the first.

National Insurance Act (1945) – unemployment pay for six months and sick pay for as long as you were sick.

National Assistance Act (1948) – benefits for anybody in need. ‘The Times’ described it as: ‘the last defence against extreme poverty’.

National Health Service Act (1948) – despite opposition from doctors, who insisted on the right to continue treating some patients privately, Aneurin Bevan brought in the NHS on 5 July 1948. Doctors, hospital, dentists, opticians, ambulances, midwives and health visitors were available, free to everybody.
Free Education

New Towns Act (1946) – authorised the building of new towns at places such as Stevenage, Basildon, Newton Aycliffe and Peterlee.

Children’s Act (1948) – required councils to provide good housing and care for all children ‘deprived of a normal home life’.
In a free market the rewards go to the strong. And having proved their strength ordinary Britons were given these rewards.

The banker induced crash in 2008 inadvertently provided a once in a generation chance to take the rewards back. Using “Austerity” as a smokescreen Labour started it and the Tory/LibDem coalition ethusiastically took up the baton and scuttled onward with it. Each chanting “We are all in it together!”

Happily for us, and to the teeth-gnashing rage of politicians, there are public servants deeply embedded in the political process who lift the lid on politicians’ shenanigans:

In the closing months of 2014, pronouncements by each of these exposed both the magnitude and the recklessness of the cuts to public services.

Government ministers desperately dismiss warnings about the impact of cuts as though their jobs depended on it (which, by the way, they do). The Department of Works and Pensions dismissed the Trussell Trust’s figures showing the rapid growth in foodbank usage by saying more people go to foodbanks because there are more foodbanks.

The government pretends that foodbanks are like Tescos, except you don’t have to pay on your way out. When in fact to use a foodbankyou must prove your need to your GP or the DWP, who will then issue you with a chit to exchange at the foodbank. Not unlike a GP giving you a prescription to get medicine from the chemist.

The government can safely ignore even the likes of Lord Dyson, the Master of the Rolls (third most senior judge in the UK) when he said cuts to Legal Aid were causing miscarriages of justice.Dyson said about people who can’t afford a lawyer and try to represent themselves:
“‘Quite often the hearing is indeed shorter than with lawyers,’ he said. ‘That is not because lawyers are there to indulge in spoiling tactics and get into technicalities for the sake of it, but I’m afraid litigants in person are overawed by the experience and just dry up.’”
Politicians don’t care about these miscarriages of justice. They think ordinary voting Brits don’t spend much time digesting the rarefied wisdom of Masters of the Rolls, and won’t get to know unless they find themselves unrepresented in court.

The government has to be more careful rubbishing reports by its own bodies. However it is in politicians’ natures to try their luck. David Cameron’s claim in 2013, following widespread floods in the UK, that he had increased spending onflood defences was sunk by the civil servants at DEFRA. Cameron’s claim, made in 2013 and again in 2014, that thenational debt was being paid off was quickly contradicted by the Office of Budget Responsibility. Cameron’s promise to slash net immigration was also proved false by the Office for National Statistics reporting it had actually increased.

Then there was a fine example of Civil Service candour when the permanent secretary (top civil servant) at the Ministry of Justice, Ursula Brennan, gave evidence to Parliament’s Public Accounts Committee in December 2014. While putting up astout defence of her civil service colleaguesBrennan stated the government’s top priority, higher than ministering justice, was to cut spending. Therefore understanding the likely impact of the cuts was unneccessary. In a testy exchange between Brennan and the Tory MP Stephen Phillips:

Q50 Stephen Phillips: You have in fact simply described the implementation of a desire to remove £300 million from the budget, without any evidence at all of what that might mean.

Ursula Brennan: I can only repeat that it was quite explicit from the start that we would not be able to do research in advance if we were to make the savings to which the Government committed. Therefore, we would conduct the research on the basis of what happened to people, because we were seeking to make a behavioural change, after it happened.

Q51 Stephen Phillips: We all understand that, but would you please stop describing that as evidence-based policy making, because it isn’t, is it?

Ursula Brennan: I was simply saying in terms of the evidence, the most critical piece of evidence that was relevant to the decision that was made was the size of the spend.

“The most critical piece of evidence that was relevant to the decision that was made was the size of the spend”! The government followed a ‘suck it and see’ strategy where others (in this case, people on legal aid) did the sucking while the government watched to see what happened.

Late in 2014 the National Audit Office (NAO) published a fusillade of reports Cameron wouldn’t have liked.
These NAO reports reinforce Brennan’s statements that the government is pursuing spending cuts without worrying about impact nor value for money. Their objective is to cut now, and deal with the fallout later:

“The Department for Work & Pensions has reset Universal Credit on a sounder basis but at significant cost, by extending the time for implementation and choosing a more expensive approach. ”
Amyas Morse, head of the National Audit Office, 26 November 2014

The graph below from the NAO report shows how the ‘lift off’ of Universal Credit has been successively pushed back from 2014 due to poor planning and control in the rush to cut. Iain Duncan-Smith’s residual optimism in 2013 meant his first re-plan had a “great leap forward” just before the May 2015 General Election so he could crow about it. His second re-plan in 2014 thought better of this, and pushes the significant impacts back conveniently just after the 2015 election so he wouldn’t risk looking a complete fool on the campaign trail:

“The Ministry of Justice..has been slower to think through how and why people access civil legal aid; the scale of the additional costs to the Ministry likely to be generated by people choosing to represent themselves; and the impact on the ability and willingness of providers to provide legal services for the fees paid. Without this understanding, the Ministry’s implementation of the reforms to civil legal aid cannot be said to have delivered better overall value for money for the taxpayer.”
Amyas Morse, head of the National Audit Office, 20 November 2014

The Impact of Funding Reductions on Local Authorities

“The Department really needs to be better informed about the situation on the ground among local authorities across England, in a much more active way, in order to head off serious problems before they happen. It should look for evidence of financial stress in local authorities to assure itself that they are able to deliver the services for which they are responsible. It should be clear about the knock-on effect of the various funding decisions taken by departments in Whitehall.”
Amyas Morse, head of the National Audit Office, 19 November 2014

Planning for the Better Care Fund
“The Better Care Fund is an innovative idea but the quality of early preparation and planning did not match the scale of the ambition. The £1 billion financial savings assumption was ignored, the early programme management was inadequate, and the changes to the programme design undermined the timely delivery of local plans and local government’s confidence in the Fund’s value.”
Amyas Morse, head of the National Audit Office, 11 November 2014

The financial sustainability of NHS bodies

“An increasing number of healthcare providers and commissioners are in financial difficulty. The growth trend for numbers of NHS trusts and foundation trusts in deficit is not sustainable. Until the Department can explain how it will work with bodies such as NHS England, Monitor and the NHS Trust Development Authority to address underlying financial pressures, quickly and without resorting to cash support, we cannot be confident that value for money will be achieved over the next five years.”
Amyas Morse, head of the National Audit Office, 7 November 2014

“The Agency, as it recognizes, will need to make difficult decisions about whether to continue maintaining assets in some areas or let them lapse, increasing in future both the risk of floods and the potential need for more expensive ad hoc emergency solutions. The achievement of value for money in the long term remains significantly uncertain.”
Amyas Morse, head of the National Audit Office, 5 November 2014

“.. there are significant gaps in the Department’s understanding of what works, and the information it has about some important aspects of school performance is limited. ”

“The NAO finds that the DfE and others, such as the Education Funding Agency and local authorities, have not tackled underperformance consistently. The spending watchdog, therefore, cannot conclude that the oversight system for maintained schools and academies is achieving value for money.”
Amyas Morse, head of the National Audit Office, 30 October 2014
As can be seen above, Government policy has evidently been to cut regardless of the effect on or cost to ordinary Britons.

When ministers say various cuts will be achieved by yet more phantom “efficiency savings” they mean they don’t know and they don’t care.

Even if they don’t care, you should. The Welfare State was hard won by past generations.

No doubt it can be improved, perhaps even by cutting it. But the driving motivation must be to improve it, not to cut it for cuts sake.

8 Responses to GOVERNMENT AUSTERITY CUTS ARE BEING CARRIED OUT WITHOUT THOUGHT OR CARE. SO SAY TOP CIVIL SERVANTS WITH NO AXE TO GRIND. WHAT ARE YOU GOING TO DO ABOUT IT IN THIS GENERAL ELECTION YEAR?