The tories – guilty of more “isims” than you can shake a stick at!

Posted on March 13, 2016 by thelovelywibblywobblyoldlady

If these rich, privileged wankers conducted themselves like this in any other occupation, they would be out on their ear.

The only time they are vaguely interested in the general public is when they want you to put an X in the box against their name on polling day.

So let’s take a look at the “isms” committed by the right honourables (this is my version and I’m sure you’ll be able to add a few of your own, so please feel free to do so in the comments section)

Twitter is awash with posts under the #nameandshame and #CameronsWorld, of all the tories who voted for the cuts to ESA here’s a very small sample … 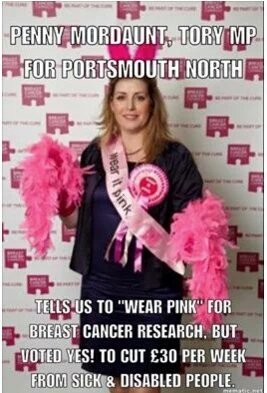 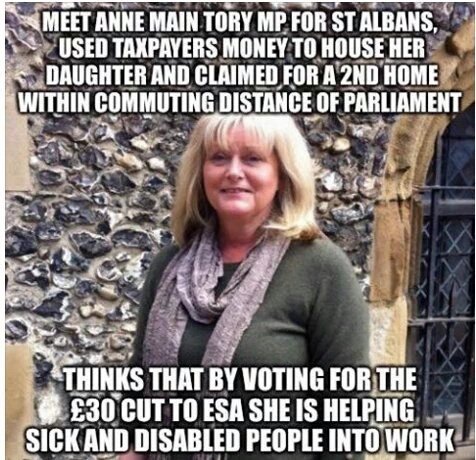 Of course the crown for King and Queen of Disablism go to Duncan Smith and his evil sidekick (not so ) Priti Patel – responsible for the horrendous work capability assessment and the personal independent payments debacle; not to mention all the deaths caused by his flawed regimes. Arbeit macht frei indeed.

Tory prick Oliver Letwin – here’s a few of his gems which were released by way of a memo from the National Archives;

“Letwin  dismissed proposals by two government ministers to invest in a scheme designed to encourage black entrepreneurs, suggesting such an initiative would only lead to them spending the money on “discos and drugs”.

“Rioting from members of black communities in Brixton, Tottenham, Liverpool and Birmingham could be explained by “bad moral attitudes”.

Letwin  also dismissed suggestions that the rioting had been caused by racism or social deprivation, despite evidence that racism in the Metropolitan Police was rampant throughout the 1980s and 1990s.

“The root of social malaise is not poor housing, or youth ‘alienation’, or the lack of a middle class,”

The fact that so many of their policies impact on women shows that they are sexist; the bedroom tax  in respect of sanctuary rooms, cuts to tax credits for those with more than 2 children, even if that child was conceived through rape or incest unless you are prepared to tell a civil servant about your abuse and then you can receive a payment for that child – Oh well that’s OK then!!!!!

The row over the honours system being used to reward Conservative Party ‘cronies’ is set to be reignited with the revelation that almost 30 Tory Party members or supporters have received awards.

Publication of the New Year’s Honours List confirms that the Australian political strategist, Lynton Crosby, is to be knighted for services to politics. It follows his short stint working for the Conservative Party earlier this year – for which he was paid £500,000. But analysis of the list shows that the future Sir Lynton is just one of many who have been honoured not for what they had done for the country, but for their services to the Conservative Party.

Alright, alright, I know it’s not really a proper “isim” but I just could not resist posting this vid of Gidiot “Junkie”  Osborne – towel folder of the exchequer.

1 Response to The tories – guilty of more “isims” than you can shake a stick at!