HAS INEQUALITY REDUCED SINCE THE CONSERVATIVE-LIBDEM GOVERNMENT OF 2010? YES, AND NO.

Posted on January 18, 2015 by thelovelywibblywobblyoldlady

Reposted from Ripped off Britons

In a bakery not far away there was a baker, who treated his customers extremely unequally. To some he gave plain buns, others spiced buns with candied fruit, and to others iced buns. He said the bankers worked harder than the nurses, and so deserved the icing. And the accountants were cleverer than the teachers but didn’t work as hard as the bankers, so they deserved the candied fruit buns. Iced buns are much better than plain buns, inequality was very great.

One day the icing machine crashed, due to a leak in the water pipes leading it to flood. With no icing there were no iced buns. The bankers could only get the spiced variety. Now spiced buns are better than plain buns, but less so than iced buns. Inequality was reduced! At least until the icing machine got bailed out.

The Tories are claiming that inequality has reduced since 2010. They are correct. Since the banker induced crash that started in 2007/08 the incomes of the top 20%, as shown by this graph from the ONS, fell more sharply than everyone else. As the rewards of the boom years weren’t shared with those on low income, like the icing on the buns, they didn’t see so much downside when the economic machine broke. 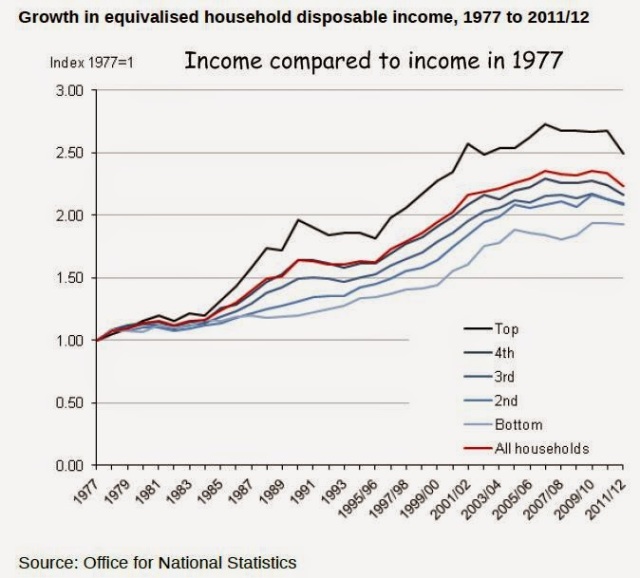 As a result of this the Tories can say ‘inequality’ has fallen.

The standard measure of inequality is the GINI Coefficient, which looks at income but not at wealth. So the Tories are correct: income inequality, GINI, did fall marginally in the years immediately after 2010.

On the other hand, since the banking crash and the policy of QE (Quantitive Easing) asset prices have grown strongly. The BBC provide a 1 minute explanation of what QE is.

The speaker, Professor John Kay of the London School of Economics, states among other things that the policy of Quantitative Easing is like: 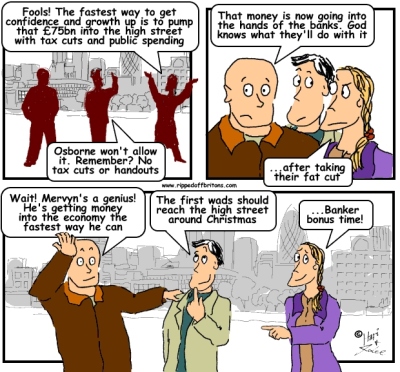 According to a report by Credit Suisse, in 2013-14 household wealth has done extremely well, with a close to 20% increase: 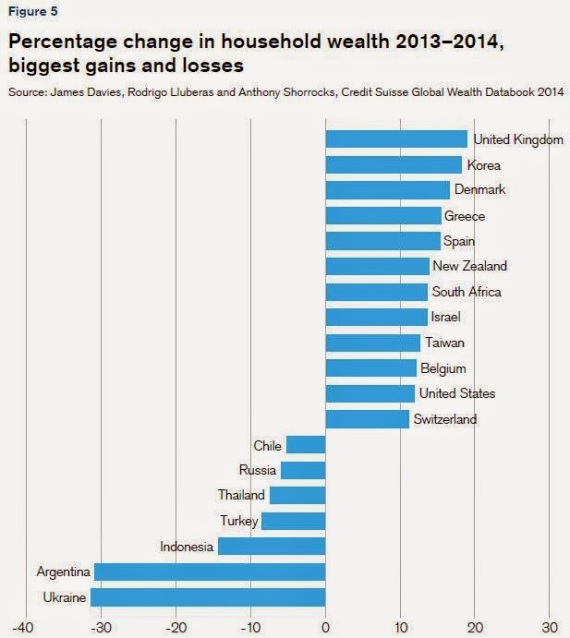 A 20% increase in assets helps those with most assets the most, and those with no assets not at all. In relation to its £325 billion of QE, the Bank of England’s report states:
“the total increase in household wealth stemming from the Bank’s £325 billion of asset purchases up to May 2012 of just over £600 billion… In practice, the benefits from these wealth effects will accrue to those households holding most financial assets.”

The Office for National Statistics “Total Wealth In Great Britain, 2010-2012” report shows how all wealth (Financial; Property; Physical; Pension) is distributed. You will notice that the bottom 50% have virtually no Financial Assets: 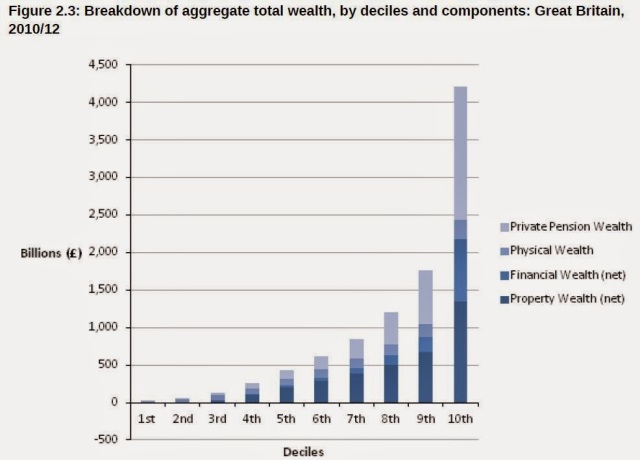 A report by Ed Conway of SkyNews, estimates how much each decile benefited from QE by 2012:

A billionaire hedge-fund manager in the USA, Stanley Druckenmiller, commented about the US policy of Quantitive Easing:
“This is the biggest redistribution of wealth from the middle class and the poor to the rich ever.”

So, in answer to the question “has inequality reduced since the Conservative-LibDem government of 2010”, the answer is:

3 Responses to HAS INEQUALITY REDUCED SINCE THE CONSERVATIVE-LIBDEM GOVERNMENT OF 2010? YES, AND NO.